A capsuleer ship transporting livestock and civilians between Jita and a nearby system disintegrated upon entering warp. CONCORD investigation yielded little due to the nature of the incident, but public market records suggest the ship was fulfilling a routine courier contract.

“Everyone gets a standard pre-departure message about safety procedures, including the use of personal electronics,” says a loadmaster with more than a decade of experience aboard capsuleer ships. “The signal strength of these devices is very low, but they can interfere with ship systems. In this case it seems to have affected warp calculations.”

Personal electronics are popular throughout New Eden and are used for entertainment and personal communication.

“Entering warp can be an exciting experience for people used to living planet-side their whole lives. I’d guess it wasn’t just one device, but perhaps a full load of civilians wanting to share video and recording the event.”

Investigators hypothesize that upon experiencing the warp sequence leaving the Jita system, the temptation to record the event was too great to heed pre-trip warnings.

”Warp mechanics have seen some changes over the years and are quite stunning in their current form. This was unfortunate but I understand the allure.”

In the future capsuleer ships may begin transporting passengers in cargo containers to minimize risk. Special exemptions to interstellar transport regulations are being sought to permit this practice. Capsuleers are advised to equip sensor boosting modules when transporting civilians in the meantime.

Pirate crews throughout null security space will undergo fleet combat training to sharpen their skills against Supercapital-class carriers. For more than a year, supercarriers have fared well through their transition from subcapital drones to fighter squadrons. While supercapital combat evolved into tight formations of coordinated fighters, pirate fleets stagnated. Their tactics of running headlong into the hulls of supercapitals proved ineffective amidst hard hitting fighter squadrons and their incredible new combat range.

Something had to be done, and the latest solution involves fleet tactics.

When facing a supercarrier, capsuleers will focus first on the offensive capability of its fighters. Supercarriers received a massive increase in combat range, but at the cost of the number of fighter reserves in their hangars. Eliminating these fighters as a first priority isn’t just a smart approach. It reduces a supercarrier to a large floating structure with no offensive capabilities. Capsuleers call this strategy “defanging.”

Fighters are the source of a supercarrier’s offensive power and they are also quite expensive. A Tech 1 light fighter costs 2.5 Million ISK, and Tech 2 is perhaps 10 Million. T1 and T2 heavy fighters are approximately 10 Million and 30 Million. Compared to the bounties placed on pirate ships and their crew, this makes bounty hunting with supercapitals much less appealing. Sometimes the best place to attack is in the wallet.

“For capsuleers it’s all practically a video game where death means simply getting into another ship. But for us, we’re just trying not to die. I’m pretty sure after our training in new combat tactics, I’ll still have crews caring more about going down in a blaze of glory and shooting supercarrier hulls rather than their fighters. If I have to guess I’d say this training will only make us perhaps 15% more effective in that combat scenario.”

This is an ongoing clash of cultures with some similarities and some rather ironic differences. While capsuleers wage wars that spill into empire and faction territories for the strategic needs of the moment, conventional factions can almost be described as reaching a peaceful equilibrium in comparison. Pirate factions whose narratives are continually pushed by capsuleers as being incompetent, weak, and barbaric.

After talking with pirates over the years, their attitude about war strikes me as calm compared to capsuleers, but they’re not far behind in the arms race. Serpentis and Blood Raiders most notably developed supercarriers and titans that have already fallen into capsuleer hands.

editor’s note: Capsuleers plan to reduce the damage of fighters by 20% for vague reasons, but they have a long history of standardizing and changing ships in the name of fairness and sportsmanship.

The Skillqueue: What’s Going On?

Capsuleers throughout New Eden experienced outages in the Pilots Licensing program yesterday and found their skill queues paused. Capsuleers suspect the issue is related to the licensing change from last year which allowed the operation of capsules and a limited selection of ships despite an expired license.

Prior to this change, capsuleers undocking or even activating their consciousness required a Pilots License Extension (PLEX), and PLEX have varied in price over the last several years with a mind-blowing upward trend. Over the last year, the cost of a month of licensing remained around 1.1 Billion Interstellar Kredits (ISK). Billion with a “B.” Current figures are closer to 1.5B ISK.

The conversion rate between one ISK and any planetary currency is hard to fathom, just like the scale of ships commanded by capsuleers. A frigate class space vessel compares to the largest hulls of planet-side atmospheric flight, and they grow bigger from there. The cost of a frigate-sized vessel with equipment and crew is perhaps five million ISK. Cruisers and Battleships increase in cost by an order of magnitude for each higher class.

So on a monthly basis, a full Pilots License costs the equivalent of approximately two hundred frigates, or fifty cruisers, or four to five battleships. Monthly. A single capsuleer’s licensing costs can fund an average first-world country’s Navy.

The value of the interstellar economy is staggering, and rooted in the movement of PLEX. Pretty nice racket for CONCORD et al.

The big question on most capsuleer’s minds is how, with so much funding month-to-month, one of the core, fundamental functions of the Pilots License program could experience a systemic failure? The exact number of capsuleers in New Eden with active PLEX status is a closely guarded statistic, but most estimates place the figure between 25,000 and 30,000.

Just how much would it cost for the skill training program to operate smoothly? What exactly is being done with all that money paid by capsuleers?

Here’s something else about this situation that bothers me. Many, if not most capsuleers didn’t realize their skill accumulation was halted. Imagine your brain could receive information as if it were a holoreel. Wouldn’t you notice if the data stopped? Exactly what state of dormancy do capsuleers enter when they dock, and how far from reality do they detach themselves?

(post-publishing edit: many capsuleers take advantage of a scaling discount for renewing their license for several months, even a year, at a time. At the highest renewal tier, capsuleers remit the equivalent of 11.6 Billion ISK in one transaction.)

The warfare technology known as Void Bombs cause more than an inconvenience to a spacefaring vessel’s energy reserves. We are probably all familiar with The Scope news reports of large battles over space dominance, but one of the overshadowed casualties of this glamorized warfare are handicapped and equal opportunity crewmembers.

Void Bombs are a version of electronic warfare that creates a deficit of electrons in a spherical volume of space from the bomb’s detonation point. We won’t get into specifics here because it’s complicated. It seems logical enough on the surface to starve a ship’s energy reserves, but the problem lies in collateral damage. The electrons are starved from all available sources, and the butcher’s bill is measured in Gigajoules. It is indiscriminate.

To make matters worse, Void Bombs are commonly launched in waves. Some coordinated volleys pack enough punch to empty a dreadnought’s power core. Long before this threshold is reached, the first to succumb to the electron deficit are certain members of a ship’s crew.

In YC 34 an obscure statute was enacted to improve the employment prospects of the disabled and rehabilitated. The Mandate for Equal Opportunity for the Workforce (MEOW) required every licensed capsuleer hire 2% of their crews from a pool of disabled or vocationally disadvantaged persons. This demographic is very well-known for its middle-aged and older composition. A considerable segment of this group rely on various versions of the life-saving electronics colloqially known as “pacemakers.”

It’s easy to imagine how well a pacemaker might fare against a weapon designed to drain the batteries of capital ships. Most pacemaker designs require a battery sized for a timepiece. Should the order of space battle include the disabled and elderly as the first casualties of an attack?

A touching case in this most unfortunate warfare sees a young Caldari citizen seeking work as a defender missile technician in memory of his father. Defender missiles were somewhat recently updated to counteract bombs like the ones that stopped his father’s heart in the battle of Asakai.

“Heart failure runs in my family. It has for generations. I plan to man my defender missiles well into my mid-hundreds and work in space in honor of my father. Not a single reload will be missed, and not a single missile will miss. Not on my watch.”

(editor’s note: the interviewed missile technician’s ship fell victim to a combination of a citadel’s void bombs and its defending fleet.)

The Commissar Kate fanclub and its readers and editorial staff demand to know: what plans have been made to address this inhumane weaponry? Was the collateral damage measured but deemed insignificant? Was the weapon intended to disable the most likely experienced portion of a crew?

Several bomber pilots have been asked for their opinion of this casualty of war, and the answers contain a disturbing theme. They didn’t know, or it was never a concern. Most troubling though are the pilots who admitted the atrocities committed with Void Bombs but simply stated they were just following orders. 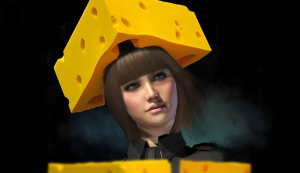 In a recent windfall listed on Bensbargains.net, 10,000 foam cheese heads were acquired from an undisclosed manufacturer of foam and inflatable merchandise sold at sporting events. The result of a clerical error in a sports team’s requisition order, a shipping container of the surplus headgear was sold for pennies on the dollar.

The cheese heads will be painted pink and white and re-purposed as cake heads, and distributed to all members of the Commissar Kate Fanclub free of charge.